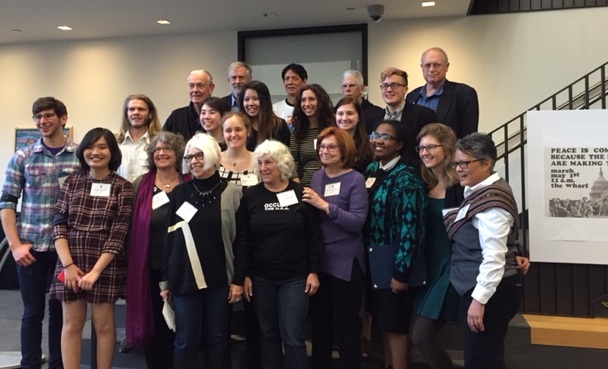 Two different generations came together at Macalester College in St. Paul, MN, last weekend, when ten contributors to The People Make the Peace: Lessons from the Vietnam Antiwar Movement took part in a three-day series of events marking the historic role the College had played during the antiwar movement of the early 1970s.

You can see the full schedule for the symposium, here.

As the present-day Macalester students learned, back in May 1970 their college played a key role in the US movement against the war in Vietnam. It was there that, in the days after the Ohio National Guard killed four students at Kent State University, leaders of the National Student Association (NSA) met to discuss their response to an overtured they’d received from colleagues in South Vietnam, to sign onto a “People’s Peace Treaty” with which both those student bodies could then reach out to their counterparts in North Vietnam, with which the United States and South Vietnam were at war.

The NSA leaders adopted the plan and drafted out the text of the document. In one very gripping chapter in the book, contributor Doug Hostetter describes how he and some colleagues managed to win support for the treaty from the student bodies in both South and North Vietnam.

The events at Macalester provided a great opportunity for the veteran activists to share their reflections with Macalester’s current student body.

Yesterday, the Minneapolis Star-Tribune, published a great report on last weekend’s events. In it, Dr. Aguilar-San Juan (who is pictured holding the mic at right), is quoted as noting that these days a federal law bars people from aiding a “foreign terrorist organization” or FTO. “Everyone in this book would have been prosecuted under that law,” she added.