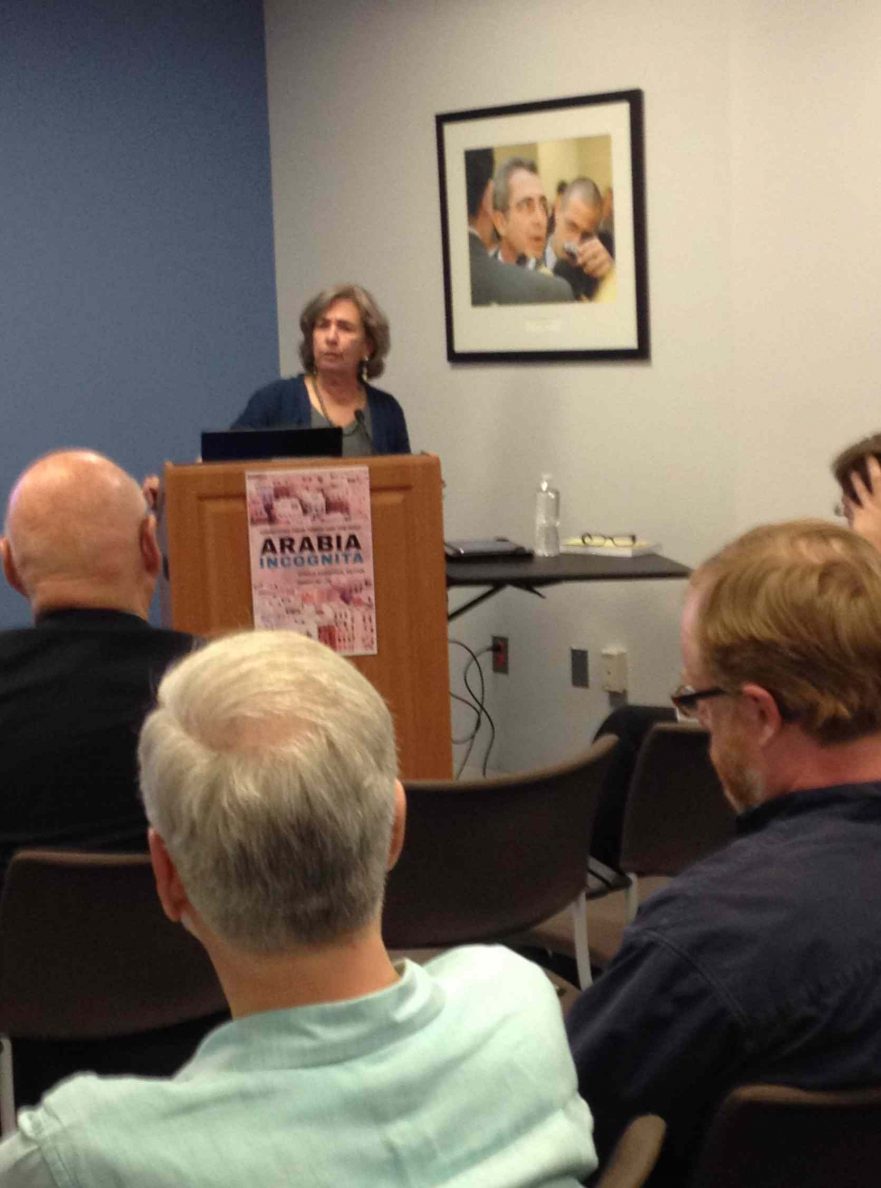 Dr. Sheila Carapico’s beautifully edited volume Arabia Incognita: Dispatches from Yemen and the Gulf is not being formally released until May 3. But on April 26, she and Dr. Michael Hudson got together at George Washington University’s Institute for Middle East Studies (IMES) to lead a very timely discussion of the many issues raised and explored in the book.

Dr. Carapico is a Professor of Political Science at the University of Richmond and a member of the editorial collective at the Middle East Report. Arabia Incognitais a compilation of articles related to Yemen and the other Arabian Peninsula states that have been published over the past 45 years in the Middle East Report, and is published by Just World Books in collaboration with that periodical’s publisher, MERIP.

Dr. Hudson is a dean of Middle East studies among US political scientists. For many years he headed the Center for Contemporary Arab Studies at Georgetown University, after which he was the founding head of the Middle East Institute at the National University of Singapore. He is also a board member of the Just World Educational Foundation– our new nonprofit organization.

Yemen has been in the news a lot lately. In March 2015, its large, rich neighbor Saudi Arabia launched and led a military “intervention” against the north of the country, seeking to quash an insurgency that had been launched there by the Northern-based Houthi movement. That military action rapidly became bogged down in Yemen’s mountainous (and heavily populated) terrain and has led to massive suffering among Yemen’s 26 million people.

Dr. Carapico started her presentation with a slide-show of some pointedly political cartoons drawn recently by the Yemeni cartoonist Samer al-Shameeri– many of whose works are included inArabia Incognita. She then presented a very quick survey of the scope of the material in the book– which goes back to some of the pieces MERIP was publishing on the Arabian Peninsula back in the 1970s. Looking at the vast popular movement that arose in Yemen’s capital, San’a, at the time of “Arab Spring” uprisings in early 2011, she commented that while some of those uprisings in other parts of the Arab world may have come as a surprise, the one in Yemen did not.

Dr. Hudson recalled that Yemen used to be compared with Lebanon as a “fragile democracy” in the Middle East. He raised the issue of the Yemeni National Dialogue now tenuously on the agenda in Kuwait, and asked if there is “any light at the end of this tunnel?”

As she responded to some of the points raised by Dr. Hudson, Dr. Carapico was adamant in noting, “I don’t think you can understand anything about Yemeni politics without understanding its relationship with Saudi Arabia and the other GCC states.”

She also noted the changeable and sometimes capricious nature of Saudi Arabia’s interventions in Yemen. Back iduring the civil war in North Yemen in the 1950s and early 1960s, she recalled, Riyadh had supported Imam Yahya– “and he was a Zaidi Shiite,” she noted. Then, when North and South Yemen decided to unify in 1990, the Saudis had opposed that unification and thrown their support behind the Southern secessionists– “and they were outright socialists!” she said.

She spoke to the role Washington has played in providing tacit (and even some overt) support for the Saudi-led war effort in Yemen, noting that Saudi Arabia and its GCC allies are a big market for U.S. weapons, and thereby help to prop up some sectors of the U.S. economy.

Asked what demands concerned U.S. citizens should be making of their government regarding the war in Yemen, Dr. Carapico said, “The U.S. government has blocked all attempts at any real ceasefire in Yemen. The Netherlands tried to push for a real ceasefire, but Washington blocked it. Supporting a real ceasefire is the least I’d expect from my government.”

She referred somewhat optimistically to moves recently underway in the U.S. Senate to start to hold the Obama administration and the Saudi government accountable for the use to which Saudi Arabia puts U.S.-supplied weapons in Yemen.

Later on in the discussion, Amb. Edward “Skip” Gnehm, the retired U.S. diplomat (who had served as ambassador in Kuwait, Australia, and Jordan) who now heads IMES, asked Dr. Carapico what could be done about Ali Abdullah Saleh, the veteran Yemeni politician who was President of North Yemen from 1978 through 1990, then President of the unified Yemen 1990-2012, and who was the target of most of the popular discontent in 2011. In an arranged transition brokered in 2012, Saleh handed over the Presidency to the present incumbent, Abderabbu Mansour Hadi– but he then resurfaced in San’a as a key ally of the insurgent Houthis!

Another participant in the discussion was Dr. Amat al-Alim al-Soswa, a veteran Yemeni politician and rights activist who had been the country’s first Minister of Human Rights (and its first female government member.) She lamented that “Since 1990, the United States has looked at Yemen onlythrough the frame of the Kingdom of Saudi Arabia.”

Dr. al-Soswa said the Saudis and their allies had launched 44,000 air-strikes against Yemen over the past 13 months– “and they have put the country back 100 years!” She described some of the horrifying statistics about the level of displacement, starvation, and near starvation of millions of Yemenis as a result of the Saudi/GCC war effort, and pled for U.S. support for a real ceasefire.

Just World Books is proud to have published Arabia Incognita, a volume that we hope will help to inform the U.S. public about the situation in Yemen and our country’s responsibilities related thereto. We are proud, too, to have helped sponsor such a richly educational discussion of the issues the book raises.