In a land where hope is the most precious commodity passed down through the generations, these stories provide a tangible platform for silenced voices to be heard and means towards gaining some dignity for a wounded nation.Ramzy Baroud, Author of My Father was a Freedom Fighter: Gaza’s Untold Story

Gaza Writes Back: Short Stories from Young Writers in Gaza, Palestine, edited by Refaat Alareer is a compelling collection of short stories from fifteen young writers in Gaza, members of a generation that has suffered immensely under Israel’s siege and blockade. Their experiences, especially during and following Israel’s 2008-2009 offensive known as “Operation Cast Lead”, have fundamentally impacted their lives and their writing. Indeed, many of these writers saw the war as a catalyst for their writing, as they sought an outlet and a voice in its aftermath. They view the book as a means of preserving Palestinian memories and presenting their own narratives to the world without filters. Their words take us into the homes and hearts of moms, dads, students, children, and elders striving to live lives of dignity, compassion, and meaning in one of the world’s most embattled communities. (Some of the stories also take us with courage and empathy into the imagined world of Israelis living just on the other side of the great barriers Israel has built in and around Gaza and the West Bank to wall the Palestinians in.)

In 2014, contributors Rawan Yaghi, Refaat Alareer, and Yousef Aljamal (pictured below) toured numerous cities around the United States to share their experiences as Gaza Palestinian writers. 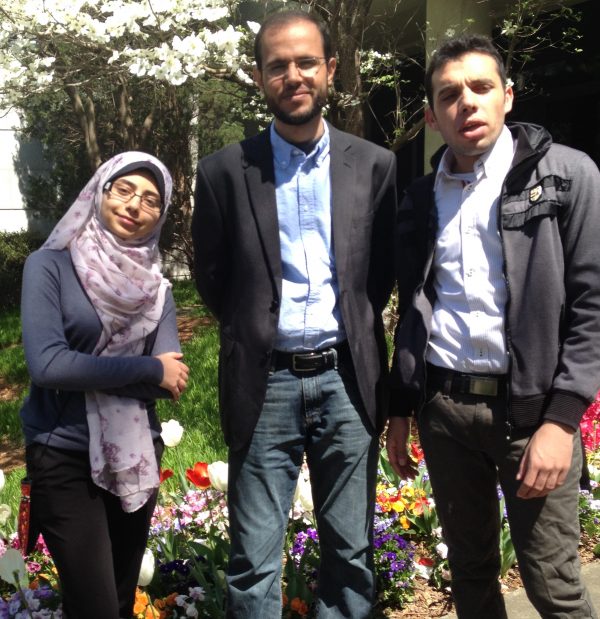 These are intimate tales of devastation—sharp as a knife and unforgettable. Families, playmates, or the writers themselves, are maimed or killed in a flash by Israeli firepower, but this new generation is writing as a form of resistance.Victoria Brittain, author of Shadow Lives: The Forgotten Women of the War on Terror

These stories are acts of resistance and defiance, proclaiming the endurance of Palestinians and the continuing resilience and creativity of their culture in the face of ongoing obstacles and attempts to silence them.

Whether tackling the tragedy that surrounds missile strikes and home raids, or the everyday indignities encountered by Palestinian refugees, Gaza Writes Back brings to life the real issues that the people of Gaza face. One prominent theme in many of the stories is the value placed on the wisdom of parents and grandparents. A sense of longing pervades the book, as the characters in the stories reveal desires ranging from the mundane to the complex—including, in several of the stories, a strong yearning to return to the characters’ long-cherished family homes and properties after many decades in exile from them. Social differences within Gaza are also sensitively explored. A few stories are especially difficult—but critical—to digest, for the vividness with which they depict the experiences of victims of Israeli military strikes and confront the legacy of violence and occupation, particularly on young people.

Where Israel’s siege has sought to erase Gaza from our consciences and silence its people, these brilliant, fresh writers burst forth with stories rooted in their real-life experiences and elevated by limitless imagination. This exciting book is a must-read for everyone who wants to hear Palestinians speak in their own voices.Ali Abunimah, Founder, Electronic Intifada and Author, One Country: A Bold Proposal to End the Israeli-Palestinian Impasse

Readers will be moved by the struggles big and small that emerge from the well-crafted writing by these young people, and by the hope and courage that radiates from the authors’ biographies. The contributors are university students and recent graduates, Palestinians who have chosen to speak out in their second language, which is an “expressive way to be more creative in a world where words are significantly mighty,” according to Tasnim Hamouda. Another contributor, Nour El Borno, believes “that if a person can write effectively, it is his or her duty to get up, write, and help change this world to something better.”

Many years after Operation Cast Lead, these stories remind us that the pain lingers on and the people of Gaza will be forever scarred by the attack. Yet, the call for justice remains forceful and persistent, and these young Gazan writers refuse to let the world forget about them—their land, their people, and their story.

Table of Contents
Introduction
Note About Some of the Words Used
The Stories:

About the Writers
Acknowledgments

Endorsement from Susan Abulhawa
The raw humanity, tenderness, and defiance in this collection of short stories by young Palestinians in Gaza stands as a testament to the resilience, moral fortitude, and beauty of oppressed and violated people everywhere. The writers are barely in their twenties and though their lives echo of bombs, bullets, and Israel’s intentional programs to dismantle them, their stories teach us what it means to have an unconquered spirit and unbroken will. These are the next generation of Palestinian writers and intellectuals. We should all nurture their voices, lift them up, and read their stories then pass them on.
–Susan Abulhawa, Author, My Voice Sought the Wind and Mornings in Jenin
Endorsement from Ali Abunimah
Where Israel’s siege has sought to erase Gaza from our consciences and silence its people, these brilliant, fresh writers burst forth with stories rooted in their real-life experiences and elevated by limitless imagination. This exciting book is a must-read for everyone who wants to hear Palestinians speak in their own voices.
–Ali Abunimah, Founder, Electronic Intifada and Author, One Country: A Bold Proposal to End the Israeli-Palestinian Impasse
Endorsement from Ramzy Baroud
These stories are a heartfelt rendition of life under occupation. The young writers give a fresh look at a generations-old crisis. They represent the resilience of the Palestinian people and their refusal to submit to a life of dejection.

What these stories provide, more than anything, is a human side to a conflict that remains largely faceless to the rest of the world. These stories are about parents and children, neighbors and friends, all of whom share a common tragedy.

Gaza Writes Back illustrates the power of the pen in offering a narrative that has otherwise been suppressed by decades of misinformation. It also takes a critical look within Palestinian society to highlight important issues.

In a land where hope is the most precious commodity passed down through the generations, these stories provide a tangible platform for silenced voices to be heard and means towards gaining some dignity for a wounded nation.
–Ramzy Baroud, Author, My Father was a Freedom Fighter: Gaza’s Untold Story

Endorsement from Victoria Brittain
These are stories that will give you for the first time the vivid texture of life and death as young Gazans felt them through Israel’s Operation Cast Lead in 2008-9. These are intimate tales of devastation—sharp as a knife and unforgettable. Families, playmates, or the writers themselves, are maimed or killed in a flash by Israeli firepower, but this new generation is writing as a form of resistance. Here are poignant echoes of the stories of Ghassan Kanafani. (He was assassinated in Beirut in 1972, but his stories have never died.) Forty years on these new stories of children’s dreams and deaths are being written by nearly two dozen Kanafanis. The book’s skilful editor sets the context with a brilliant opening quotation from the great Nigerian writer Chinua Achebe: “Storytellers are a threat….they frighten usurpers of the right-to-freedom of the human spirit.”
–Author, Shadow Lives: The Forgotten Women of the War on Terror
Endorsement from Michelle Cohen Corasanti
These Gaza short stories should be required reading for all because they create awareness and awareness leads to understanding and understanding leads to change.
–Michelle Cohen Corasanti, Author, The Almond Tree
Endorsement from Ghada Karmi
This collection of marvellous first-hand stories expresses as only good literature can the feel of life and death in Gaza. Here are moving, poignant snapshots of real experience which will haunt and fascinate the reader with their eloquence. It is time that Gazans spoke out against their dehumanisation and the world heard them. Essential reading to understand what has been done to Gaza and how its brave people remain unbowed.
–Dr. Ghada Karmi, Author, In Search of Fatima: A Palestinian Story
Endorsement from Jean Said Makdisi
This volume of short stories marks the fifth anniversary of the infamous 2008-9 Israeli attack on Gaza, “Operation Cast Lead. ” Our familiarity with what happened then does not lessen the power of the cruel lines etched into their writers’ memories, nor disguise their need to write and thus master the terrible realities of Palestinian life.

For anyone who values the raw voice of human experience over the rarefied refinements of professional writing, these short stories will come as a shock. Instead of the sanitized and heartless statistics of the toll taken by those weeks, or the impersonal photographs and official reports that record the brutal attack and the occupation, we have lightly fictionalized intimate, personal accounts of the lived experiences. Though death, illness and horrific violence stalk every page, the stories and their writers shine through as strong, truthful, and sometimes even cheerful or romantic. Always, however, they clearly represent an unspoken determination to resist the violence, and a brave resolve not to surrender to despair.
–Jean Said Makdisi, Author, Beirut Fragments: A War Memoir

Endorsement from Samah Sabawi
Gaza Writes Back is a confronting, bold and intriguing book that takes us up close and personal into the minds of a young articulate Palestinian generation born stateless, under occupation and growing into adulthood under siege in one of the world’s most oppressed and dangerous environments.

This is a generation that is physically confined within Israel’s walls and emotionally scarred by Israel’s relentless bombings and incursions. Though the stories are Palestinian, Israel’s presence is felt on every page. In fact, a few writers have even tried to enter the minds of Israeli soldiers by creating Israeli characters and trying to imagine how they think and how deeply they may regret their actions. It is as if reducing the IDF to human size, imagining them capable of fear, lament and guilt helps the writers overcome their own fear of the “other.”

This book also expresses anger at the uncertainty of life while the writers continue to cling to faith and hope. But make no mistake about it, unlike other works that romanticize Palestinian steadfastness or “summud,” this book intimately reveals a simple truth; steadfastness is not a deliberate choice or a romantic defiant act of resistance, it is simply a human instinct to survive.

The overwhelming voices of young female writers and their refined eloquence and capacity to express dissent not only challenges our stereotypical perception of Palestinians and women in Gaza in particular, but it also challenges the norms within Palestinian society itself. One can’t help but contrast this with the lack of young female presence in Palestinian official political circles.

This book is a promise of a change in societal norms and a positive sign of what is to come. Despite the horror, the frustration, the physical and emotional scars, the voices in Gaza Writes Back have not given up on their ambitions and have not resigned their dreams for a better future.
–Samah Sabawi, Palestinian commentator, author, poet and playwright 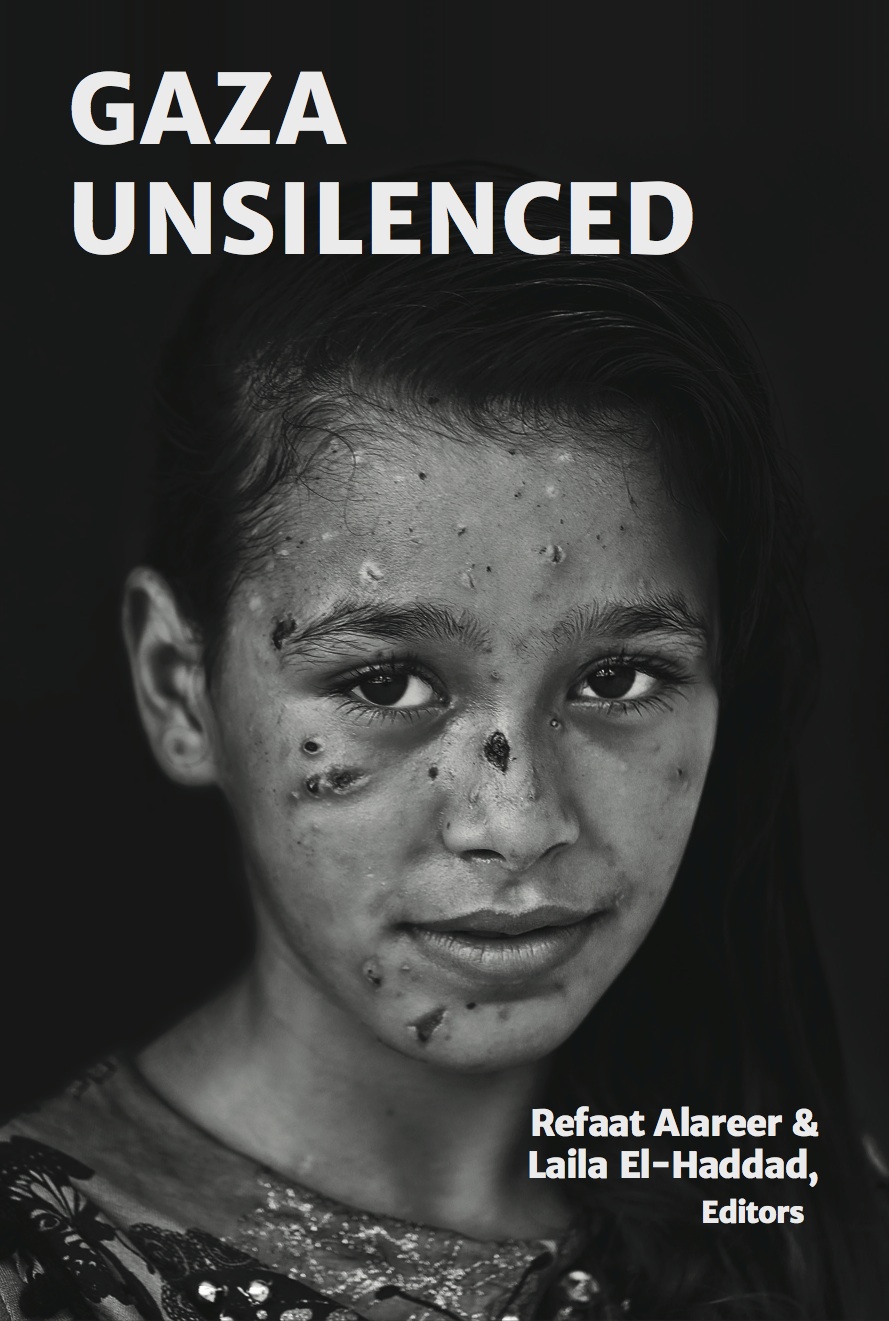 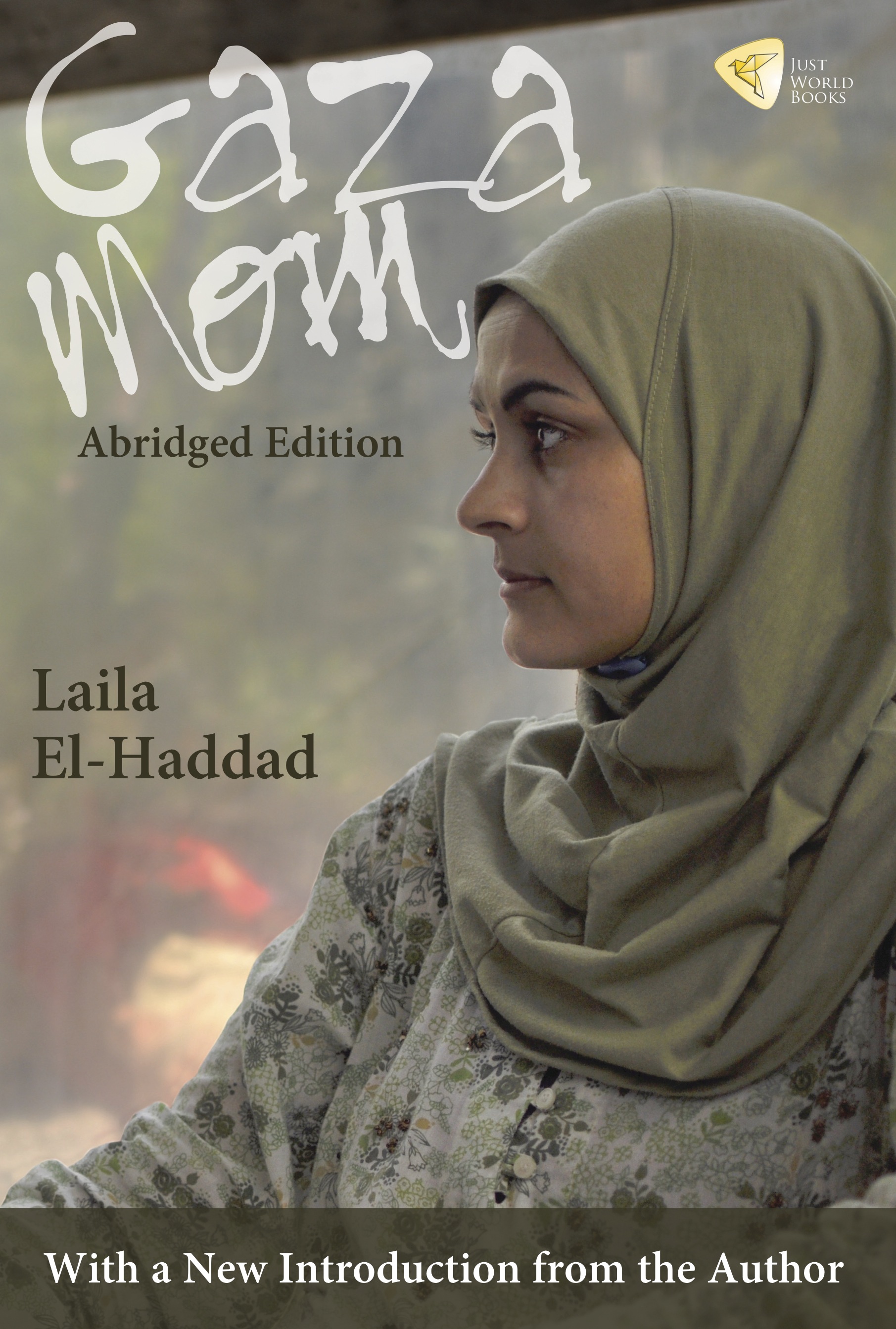