The People Make the Peace

…this collection help[s] fill in many blanks, adding essential color to the story of this astounding citizens’ movement, especially the remarkable saga of the 1970-71 People’s Peace Treaty. They inspire reflection that America still sorely needs.Todd Gitlin, Columbia University

The People Make the Peace

Forty years after the Vietnam War ended, many in the United States still struggle to come to terms with this tumultuous period of U.S. history. The domestic antiwar movement, with cooperation from their Vietnamese counterparts, played a significant role in ending the War, but few have examined its impact until now. In The People Make the Peace, edited by Karín Aguilar-San Juan and Frank Joyce, nine U.S. activists discuss the parts they played in opposing the War at home and their risky travels to Vietnam in the midst of the conflict to engage in people-to-people diplomacy.

The book shatters stereotypes of protesters and shows the activists as thoughtful, courageous and compassionate strategists whose dedication to peaceful diplomacy helped end the war earlier…Medea Benjamin, CODEPINK

In 2013, the “Hanoi 9” activists revisited Vietnam together; this book presents their thoughtful reflections on those experiences, as well as the stories of five U.S. veterans who returned to make reparations. Their successes in antiwar organizing will challenge the myths that still linger from that era, and inspire a new generation seeking peaceful solutions to war and conflict today. The book’s contributors [pictured below] include: 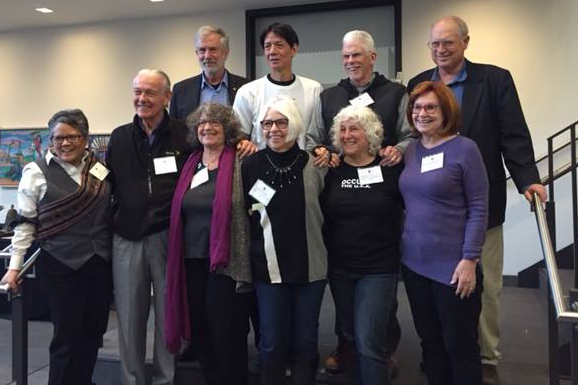 FROM THE EDITORS OF THE PEOPLE MAKE THE PEACE

DEAR READER: Shortly after this book went into print, it was revealed that one of the five ex-combat veterans interviewed by Myra MacPherson in Chapter 9 was an imposter. As it turned out, Chuck Palazzo had fabricated his entire story from beginning to end, entrapping many people for many years in an elaborate and ultimately devastating lie. He was a Marine, but he did not jump out of a helicopter. He was stationed in Okinawa, but he never fought in Vietnam. When Palazzo was finally exposed, the Veterans for Peace discovered that he had also stolen $100,000 from its vital resources to aid Vietnamese victims of unexploded ordnance and Agent Orange.

As you might expect, these revelations shocked and disheartened his colleagues, other veterans, and the journalists who trusted and documented his story. As Chuck Searcy put it, “I felt betrayed…This has severely damaged all of us…every lie was another betrayal.” Myra MacPherson has since submitted a revision of Chapter 9, including new research on “fake warriors.” This revision will be included in the next print run of People Make the Peace.

ON FAKE WARRIORS
“The Vietnam War, once so unpopular that college students bragged about how they pulled scams to avoid the draft, has in the fog of memory mutated into something glamorous to many who never even saw boot camp. The Vietnam memorial and its traveling mini memorials have served to honor the once scorned Vietnam veteran, but danger lies in contorting a fiasco of a war into glory, which fake warriors perpetuate.” –-Myra MacPherson

Notes
Resources
About the Contributors
Acknowledgments
About the Editors

Endorsement from Medea Benjamin
Karín Aguilar-San Juan & Frank Joyce’s The People Make the Peace: Lessons From the Vietnam Antiwar Movement presents an insightful examination of the Việt Nam antiwar movement with fascinating stories by nine activists who made wartime trips to Việt Nam to establish people-to-people contacts. The book shatters stereotypes of protesters and shows the activists as thoughtful, courageous and compassionate strategists whose dedication to peaceful diplomacy helped end the war earlier that it would have otherwise. Anyone interested in putting a halt to our current state of perpetual war—and stopping future ones—will get inspiration and direction from the lessons so brilliantly conveyed in this book.
–Medea Benjamin, Co-founder of the peace group CODEPINK and the human rights organization Global Exchange
Endorsement from David Cortright
A marvelous collection that comes full circle in understanding America’s past and present relationship with Vietnam, and that reminds us of the power and impact of the antiwar movement through the voices of peace advocates from that era who recently returned to Vietnam.
–David Cortright, Director of Policy Studies at Notre Dame’s Kroc Institute for International Peace Studies
Endorsement from Richard Falk
This is a wonderfully moving, inspiring, and instructive collection of autobiographical essays by prominent Vietnam War activists who kept the faith over the decades since they joined in signing an extraordinary treaty of peace between the American and Vietnamese people in 1973. The authors succeed, above all, in making us realize how profoundly wrong it was ever to wage war against this proud people who so often returned our violence with their love. Everyone who cares about this country needs to read this book in a hurry.
–Richard Falk, Professor Emeritus of International Law and Practice, Princeton University
Endorsement from Todd Gitlin
The American movement against the Vietnam War was the largest, most complex, and most effective antiwar movement in history, but neither its scope nor its complexity have gotten their due in the historical record. The essays in this collection help fill in many blanks, adding essential color to the story of this astounding citizens’ movement, especially the remarkable saga of the 1970-71 People’s Peace Treaty. They inspire reflection that America still sorely needs.
–Todd Gitlin, Professor of journalism and sociology at Columbia University
Endorsement from Marilyn Young
The People Make the Peace is an invaluable document describing the varied experiences of one significant segment of the movement against the war in Vietnam. Activists who engaged in what Hanoi and the NLF called “people’s diplomacy,” recall their experiences and place them in the context of a more recent visit to the country as well as current US foreign policy. In addition, five veterans now living and working in Vietnam to alleviate the damage done by the war they fought talk of their past and present experiences. The volume will be of interest to all who cherish peace and work towards achieving it.
–Marilyn Young, professor in the Department of History, New York University