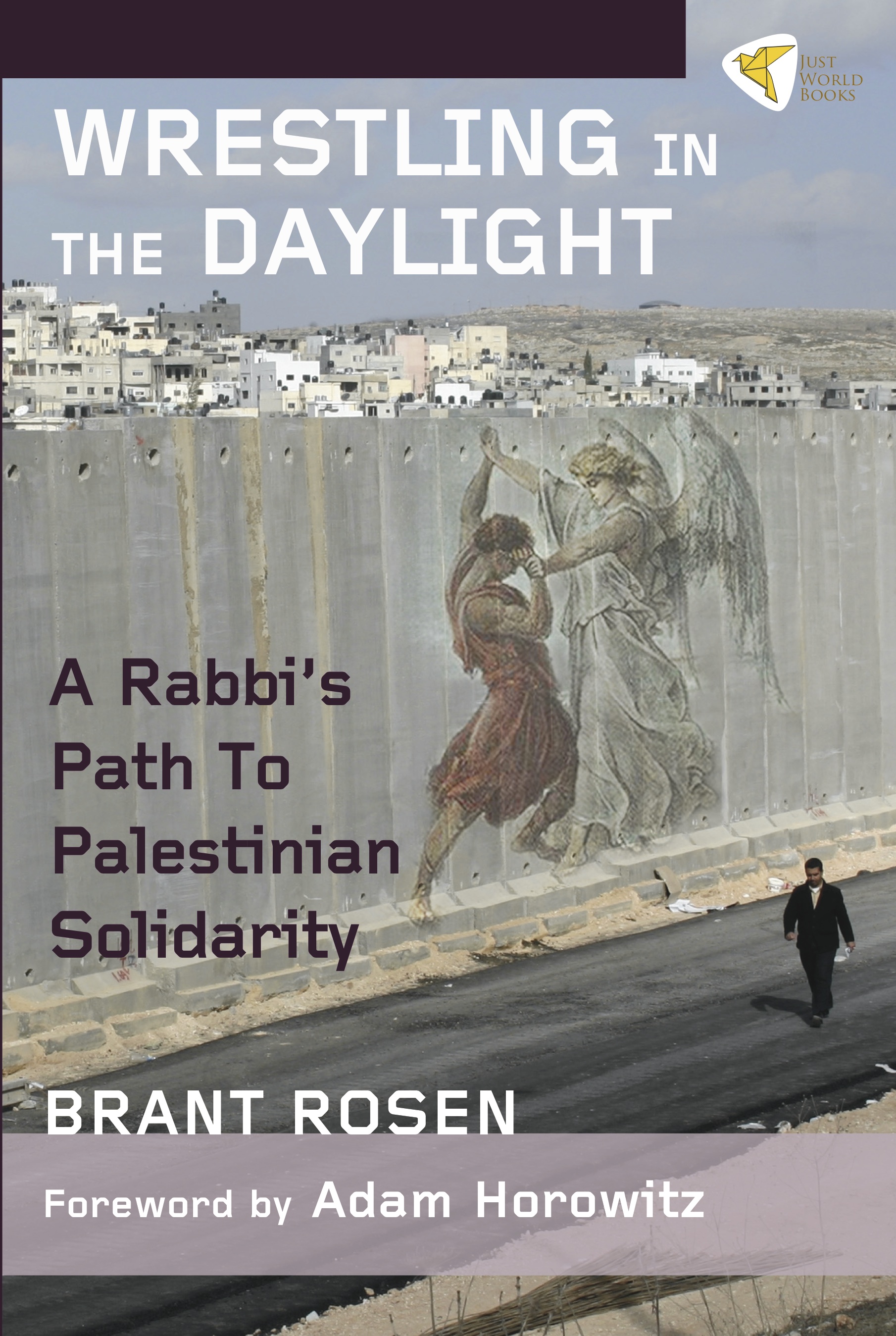 A Rabbi’s Path to Palestinian Solidarity
by Brant Rosen

If you want to understand the inner struggle of American Jews about Israel, this is a must read.Rabbi Michael Lerner, editor of Tikkun Magazine

In 2006, Rabbi Brant Rosen, who served a Jewish Reconstructionist congregation in Evanston, Illinois, launched a blog called Shalom Rav, in which he explored a broad range of social-justice issues. The focus of his writing—and his activism—changed dramatically in December 2008, when Israel launched a wide, 23-day military attack against Gaza, causing him to deeply question his lifelong liberal Zionism. Unlike the biblical Jacob, who wrestled in the dark of night at a crucial turning point in his life, Rabbi Rosen chose to make his struggle public: to wrestle in the daylight. Over the two years that followed, Shalom Rav became a public and always highly readable record of his journey from liberal Zionist to active and visionary Palestinian solidarity activist. Wrestling in the Daylight: A Rabbi’s Path to Palestinian Solidarity is Rosen’s self-curated compilation of these blog posts.

Thanks be to God that Rabbi Rosen decided to join the hardest wrestle of our day, the one with our Jewish and our Palestinian ‘Others’.Rabbi Arthur Waskow, director, The Shalom Center

But Rabbi Rosen has not struggled alone. As he began to question some of his own most long-held beliefs, many of his congregants and other readers, Jewish and non-Jewish, were drawn to the depth of his questioning and came along for the journey. Others disagreed passionately with his lines of argument, but stayed to read, debate, and participate. Wrestling in the Daylight includes many of the discussions that took place on his blog’s comment boards. It thus provides readers with a privileged window not only into the grace-filled, compassionate, and sometimes anguished reasoning of one rabbi, but also into the whole, complex web of discussions that have arisen within and beyond the American Jewish community over the ever-thorny Palestine/Israel question. Readers of Wrestling in the Daylight will find themselves drawn deep inside debates over such issues as:

In his Preface, Rabbi Rosen writes, “I’ve come to believe that too many of us have been wrestling in the dark on this issue for far too long. I believe we simply must find a way to widen the limits of public discourse on Israel/Palestine, no matter how painful the prospect. It is my fervent hope that the conversations presented here might represent, in their small way, a step toward the light of day.”

Both the content of the main blog posts in Wrestling in the Daylight and the generosity with which Rosen includes—and seriously engages with—the views of his harshest critics show us an admirable spiritual leader at work. In many different ways, this book can serve as a valuable resource for all those within or beyond the Jewish community, who yearn to hold open and honest discussions on Israel and Palestine.

Endorsement from Diana Buttu
Brant Rosen’s book is a journey of a rabbi who moves from believing in liberal Zionism, to questioning it to eventually abandoning it, in favor of humanist values of equality for all, irrespective of religion. Originally disturbed by Israel’s actions in Lebanon in 1982 and later Israel’s bombing campaign in Gaza in December 2008, Rosen begins to question Israel’s actions towards the Palestinians. In his personal journey, Rosen gently tries to bring readers of his blog and members of his congregation to view Israel and Zionism from the standpoint of its victims, prodding and pushing his readers to abandon the oft-repeated excuses for Israel but to question whether Zionism benefits anyone.
–Diana Buttu, legal scholar and former advisor to the PLO negotiators
Endorsement from Laila El-Haddad
Rosen wrestles openly, ‘in the daylight’ with his deepest moral dilemma: reconciling the classic Zionist narrative that has informed him his entire life with Israel’s inexcusable treatment of the Palestinians (and the liberal Zionism often used to rationalize it). We accompany him on his journey. The result is an eye-opening, much-needed contribution to the discourse surrounding Zionism in the American Jewish community. A critical work.
–Laila El-Haddad, Author of Gaza Unsilenced and Gaza Mom: Palestine, Politics, Parenting and Everything in Between
Endorsement from Jeremiah Haber
Rabbi Brant claims that he only speaks for himself, but in fact he speaks for an increasing number of Jews of all shades of belief and practice, from orthodox to atheist, who view the Israeli dispossession and domination of the Palestinians to be the central challenge facing Israel and the Jewish people today. This collection of posts from his blog, together with comments of critics and supporters, provides a model for rational yet impassioned discourse about Israel and Palestine.
–Jeremiah Haber, blogger, The Magnes Zionist
Endorsement from Michael Lerner
Brant Rosen is at once a courageous rabbi and the voice of a new generation of American Jews who are refusing to allow the right-wing voices of the Jewish world to define Judaism and loyalty to the Jewish people as requiring blind loyalty to the policies of the State of Israel. Wrestling in the Daylight provides us with a brilliant presentation of the evolution of his thinking from a liberal Zionist to an outspoken critic, along with the reactions of members of his Reconstructionist congregation in Evanston, Illinois, and other readers of his blog, many of whom challenge his views and push him in ways that end up deepening his universalist commitments. If you want to understand the inner struggle of American Jews about Israel, this is a must read.
–Michael Lerner, editor of Tikkun Magazine, chair of the Network of Spiritual Progressives, author of 11 books including Jewish Renewal: A Path to Healing and Transformation and Embracing Israel/Palestine: A Strategy for Middle East Peace
Endorsement from Yonatan Shapira
It was fascinating to read Brant’s book and see in how many ways the process of breaking ranks and overcoming your tribal identity is so similar, whether you are an officer in ‘the most moral army in the world’ or a rabbi in Chicago. I would give this book as a gift to many Jewish Americans, rabbis and others who, despite their doubts, have chosen to carry on being ‘good soldiers’ in the service of the Israeli occupation.
–Yonatan Shapira, Israeli human rights activist
Endorsement from Arthur Waskow
Thanks be to God that Rabbi Rosen decided to join the hardest wrestle of our day, the one with our Jewish and our Palestinian ‘Others’. The one, once more, that really is with God. May the Rabbi’s wrestle, like the ancient one of God with Jacob, remind us that wrestling God can be a lot like making love—even, or especially, with those we thought our enemies.
–Rabbi Arthur Waskow, director, The Shalom Center, co-author with R. Phyllis Berman of Freedom Journeys: The Tale of Exodus & Wilderness Across Millennia

Wrestling in the Daylight is available in Paperback ($20.99)