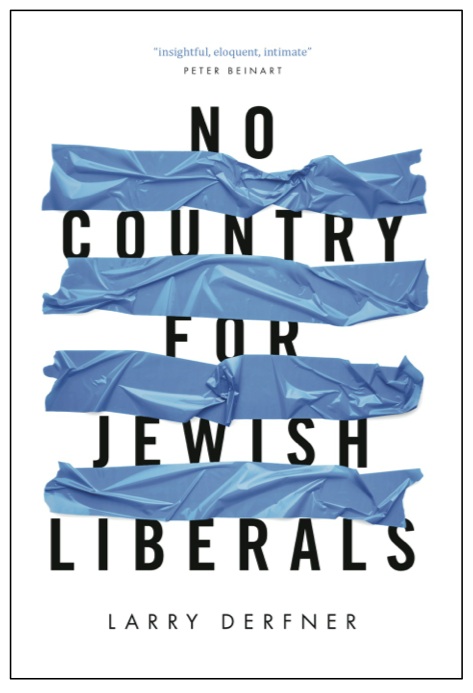 No Country for Jewish Liberals

An insightful, eloquent, intimate book about the liberal Jewish dilemma: How to love a country whose policies you hate.Peter Beinart, author, The Crisis of Zionism

No Country for Jewish Liberals

No Country for Jewish Liberals is Larry Derfner’s personal and political story of life in contemporary Israel, describing how an American Jewish emigrant and his adopted country grew apart. Taking readers from his boyhood in Los Angeles as the son of a Holocaust escapees, through his coming of age amidst the upheaval of the 1960’s America, to his move to Israel and controversial career in journalism, Derfner explores Israel’s moral decline through the lens of his own experiences. This provocative book blends memoir, reportage, and commentary in a riveting narrative of a society that has come to alienate its Jewish liberals.

Larry Derfner began his journalistic career in 1981 at City News Service of Los Angeles, and continued it in Israel as a columnist and feature writer with the Jerusalem Post. He has worked as a correspondent in Israel for the U.S. News and World Report, and the as a contributor to the Sunday Times of London, Salon, The Nation, Tablet, Forward and many other publications. He currently serves as a copyeditor and op-ed contributor at Haaretz. He lives in Modi’in, Israel with his wife and sons.

An insightful, eloquent, intimate book about the liberal Jewish dilemma: How to love a country whose policies you hate.Peter Beinart, author, The Crisis of Zionism

“No Country for Jewish Liberals” is a masterful personal analysis of the deterioration of Israel’s relations with its Palestinian neighbors and its deleterious impact on the country’s democratic ethos. Larry Derfner’s political awakening is a bittersweet story of love of Israel and disillusion with its trajectory, of alienation from its policies and complete involvement with its people and their future. Any liberal will recognize the evolution of feelings and insights that he conveys so skillfully in this accessible and poignant political memoir. This is truly a must read for those who care deeply about Israel and worry about where it’s going.Naomi Chazan, former Deputy Speaker of the Knesset, Professor (emerita) of political science at the Hebrew University of Jerusalem

I’ve read Larry Derfner’s impassioned but also factual columns with considerable interest over the years. He’s insightful, clever and even manages to be funny. The publication of this book is a welcome capstone to his career.Norman G. Finkelstein, writer and lecturer

Larry Derfner has written a street-talking, brash, incredibly readable and thoughtful memoir about his 30-plus years in Israel, and the battle between his ideals and his affection for the country. It’s a useful antidote for the usual shouting points of debate about Israel. No matter what view of Israel you have when you begin reading, you’ll have a more complicated and conflicted view when you finish.Gershom Gorenberg, author, The Unmaking of Israel

Derfner—who does not cease to be a field reporter even after being fired for his non-kosher views—offers much more than a memoir. An insider and an outsider in his adopted country, his personal journey is a description of a society’s contradictions, and his own contemplative zigzags—a tale about Israel’s drift into an abyss.Amira Hass, Haaretz’s correspondent for the Occupied Territories, author, Drinking the Sea at Gaza

Larry Derfner has written a fascinating memoir of growing up in Los Angeles and moving to Israel and finding happiness in his everyday life there, but being beset by a growing realization that he is living in a morally failed state, and can do little to change it. It is a riveting account of Israel’s history told through the lens of Derfner’s life. I had trouble putting it down.John B. Judis, author, Genesis: Truman, American Jews, and the Origins of the Arab/Israeli Conflict

This is a coming of age book—a very personal story by an Israeli journalist, not about learning the hard truths of the world that bring an end to adolescence, but about the intellectual, emotional, and political turmoil of trading feel-good enthusiasm for real empathy and clear-eyed application of liberal principles. It is a compellingly readable account of an immigrant who became an insider; and about his jagged journey from naiveté to carefully managed limits to knowledge, to a strained search for excuses, and, finally, to a searing acceptance of the near impossibility of a liberal democratic Israel.
The book will teach most readers a great deal about what Israel is and how it differs from what they thought it was. Derfner declares that his hope is not lost. That he does so, even while admitting that he encourages his sons to emigrate, reflects a rare and unsettling combination of acute analysis and emotional honesty.Ian S. Lustick, Bess W. Heyman Professor in the Political Science Dept., University of Pennsylvania

Anyone seeking to understand liberal disillusionment with Israel should look no further than Larry Derfner’s scathingly contrarian memoir of Zionist disenchantment, a cri de coeur for his adopted home, which, despite it all, he still loves. Derfner’s stark message for those who warn of Israel’s immoral future is that, although he believes the country is not beyond redemption, the future has long since arrived.Nathan Thrall, author, The Only Language They Understand: Forcing Compromise in Israel and Palestine